A tribute to Sue Bowen, our trustee for many years… 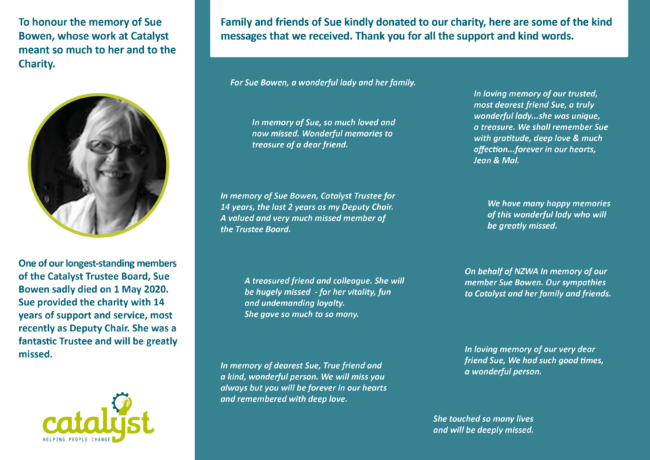 Catalyst Board of Trustees adopts the new Charity Governance Code

Catalyst Board of Trustees have adopted the new Charity Governance Code.  As part of the adoption process the trustees have been assessing the Trustee Board and the charity against all the 75 good practice components that make up the full Code.

Trustee Warren Rockett said “Catalyst has high standards where governance is concerned. But we are not complacent and we welcome this new Code against which we have already started to benchmark ourselves. In all the critical areas the charity and its Board already substantially meets the requirements of the Code.”

The Code is not a legal or regulatory requirement but it sets down the 7 principals and the recommended practices for good governance. Catalyst will publish in its annual report an update on how we have used the Code to ensure we deliver good governance.

The 7 principles in the Code are:

The full Code can be downloaded at: https://www.charitygovernancecode.org/en/pdf

This website uses cookies to improve your experience while you navigate through the website. Out of these, the cookies that are categorized as necessary are stored on your browser as they are essential for the working of basic functionalities of the website. We also use third-party cookies that help us analyze and understand how you use this website. These cookies will be stored in your browser only with your consent. You also have the option to opt-out of these cookies. But opting out of some of these cookies may affect your browsing experience.
Necessary Always Enabled

Any cookies that may not be particularly necessary for the website to function and is used specifically to collect user personal data via analytics, ads, other embedded contents are termed as non-necessary cookies. It is mandatory to procure user consent prior to running these cookies on your website.